You Want to Become a Great Actor? Imagine It! 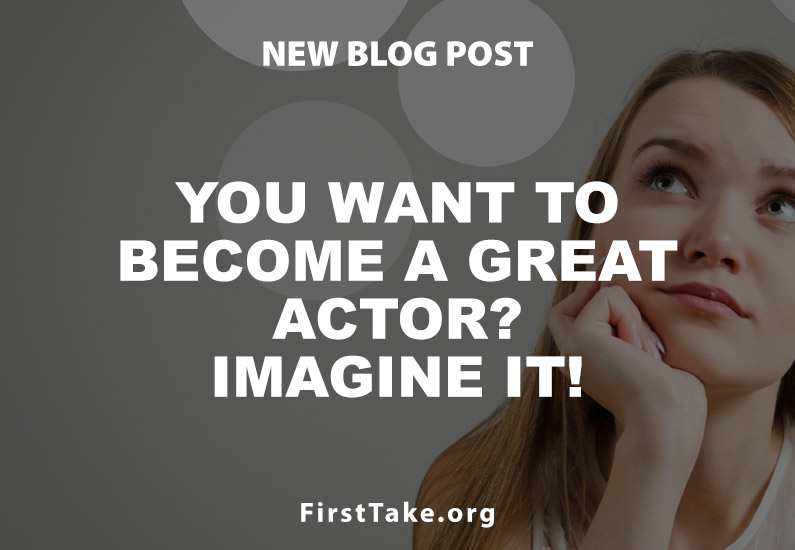 Being an actor comes with a built in dilemma: the ratio of time spent actually performing verses time spent preparing for that work is very lopsided. Years and years of training, auditioning, and enduring the inevitable emotional ups and downs associated with the career are rewarded with fractional and disproportionate compensation. That is to say, you prepare a lot to perform a little. Moreover, the time spent in preparation and training can be fraught with its own set of difficulties; limited funds for acting class, a work schedule that conflicts with the next stage production or indie film project, or personal circumstances which make it difficult to audition on a consistent basis are all issues that most actors must come to terms with at one point or another in their career. Given this near universal truth, how can the craftsman combat this inevitable set of challenges in the quest for greatness? Step one: imagine it!

Bar none, imagination is the most basic and central component of the art and craft of acting. Much discussion is dedicated to, and many opinions are offered on a variety of other skill subsets which are not inconsequential, but are nonetheless secondary to imagination. Training for audition technique, voice, improvisation, on camera awareness, languages/dialects, and many other skills while important, pale in comparison to the fundamental skill of imagination.

Acting is an exercise in the use of imagination by the actor to achieve a certain and specific reality based on artificial circumstances given by a writer. The actor must create this reality by visualizing experiences, circumstances, and images which comprise past, present, and future. There are no short cuts either – we’re not talking about pretending to play characters in an external and superficial way. The point is to make the imagination work so vivid the actor tricks his mind into believing he is actually living in this alternate reality. This is the art and craft of acting and it can be practiced almost anytime and anywhere, under any circumstances.

Often times an actor will only consider himself practicing his craft while in class or during performances. This precept could not be further from the truth and is a fundamental misunderstanding of what the requirements are for the position. Like the silence between the notes of a great piano concerto, the imagination work of an actor must be tirelessly exercised between performances (which include auditions) in order to attain and maintain the requisite elasticity and skill which all roles require to some degree or another. Furthermore, there are endless possibilities when considering the opportunities to practice and hone the skill of imagination.

Of course the most obvious time to practice is while working in acting class itself. In a typical scene study class, the main point to understand is that the actual class should not be viewed as the only place where all the practice and “work” takes place. Notwithstanding real time adjustments, the acting class itself is mostly a measurement tool, a point of reference for how thorough and effective the imagination work was between classes. Since there is no limit to imagination and how far one can go with making imaginary circumstances more real and vivid, there is no limit to the work that can be done in preparation for acting class. The work of an actor in preparation for any role, whether in acting class or on a Hollywood set, is actually limitless and there is no true arrival at a specific destination known as ‘fully prepared’.

But what if the actor is not enrolled in class, auditioning regularly, or working on a production? How much work can be done on his craft? The answer is as much as he likes. Daily life offers a myriad of opportunities for an actor to work on his craft. Here’s just one example out of an infinite supply of ways to practice: you’re grocery shopping and a young mother is having difficulty controlling her young children. Imagine yourself in her position…maybe feeling embarrassed that your children are not well behaved, or you are frustrated that they are not listening to you. Spend time making it so real in your mind that you actually start thinking about how you are going to discipline your children or consult your partner for assistance. Or you could choose to be the checkout person, on the receiving end of a frazzled mom and her unruly children picking candy bars off the racks making a mess by the conveyor belt. Maybe you are the customer next in line and you are in a hurry to get somewhere – maybe an extremely important appointment, but these kids might make you late! Really put yourself in the position of one or all of these people until you understand and can feel what it’s like to be there.

Once the basic circumstances become real, you can add layers: as the mom you just found out your husband got fired and you are worried about where the money will come from to pay for groceries next week. Raise the stakes even higher by imagining you just got a call from your doctor saying you have a life threatening illness. While doing this exercise it’s very important to make sure and not imagine children you don’t know and someone else’s doctor. Use children you know and your doctor, etc. This isn’t about projecting fictitious characters into your life; it’s about putting yourself in different circumstances, making it your life and asking “what if this was actually me in this situation?

This is just one very basic way to utilize an everyday experience to exercise your skills as an actor. The possibilities are absolutely endless. So, the next time you feel sidelined, despondent, rejected, or frustrated by the limited amount of time performing your craft, remember that you can be working towards mastery all the time, no matter what the circumstances. Then, when the next audition comes around you might not only impress the Casting Director, you might even amaze yourself with performance!