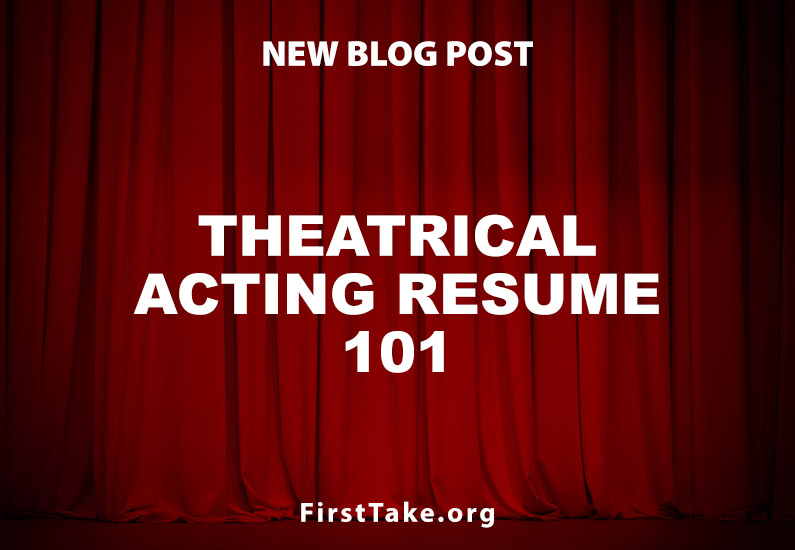 Many actors have heard the saying, “take care of the things that are within your control and don’t worry about the things you can’t”, yet they don’t actually practice this simple, yet important principle. Whether you are a beginning actor with little or no credits, or you are a seasoned professional, there isn’t a good reason for actors of all levels not to have a polished resume. The resume is one of those items which are well within your control and given the fact it is the calling card for your product, it is essential to learn the basic requirements and ensure they are met. 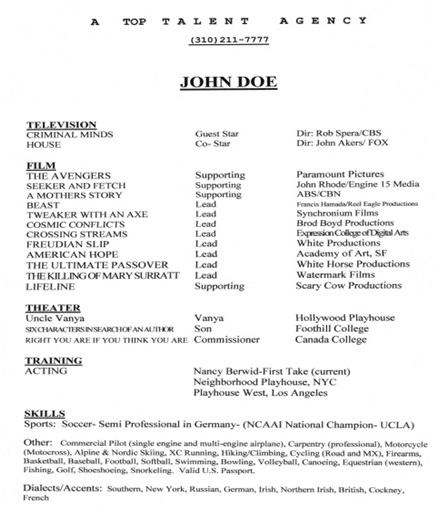 The resume should be on good quality white paper, neatly trimmed down to the exact size of 8”x10”, the same size as the headshot. Two staples (flat side on the picture side) at the top should attach the resume to the back of the headshot.

If the actor is represented by an Agent or Manager, that name and contract information should be at the top of the resume.

Union affiliation with SAG-AFTRA, AEA or SAG –E or SAG eligible may be included with the name and contact information.

The basic categories for inclusion on a theatrical resume are: Film, Television, Theater, Training, & Skills. Sometimes it makes sense to include Education as a category if it was a degree earned with relatable training (i.e. Master of Fine Arts at NYU, BA in Theater, etc. Commercials should not appear on a theatrical resume.

Film credits are listed as Lead, Supporting, Featured, and should not be listed chronologically, but rather by most impressive. Playing a supporting role in a major film would be listed over a lead in an obscure Indie pic. Never list work as an “extra”. The name of the studio and/or the director is listed in the far right column.

Television credits are listed as Series Regular, Recurring Guest Star, Guest-Star, Recurring Co-Star and Co-Star. Typically the name of the Director and network are listed on the far right column. Again credits should be listed by most impressive first.

One note about order: the general rule of thumb overall is to get your most impressive credit listed as high as possible on the resume. Therefore, if your most impressive credit is in film…then film is the first category. The same is true with television, however not with theater (unless of course you are a stage actor focused on work in theater).

When actors are newer and don’t have many credits, Casting Directors and Agents will look more closely at training. Obviously a solid background with a well-known acting school or coach is imperative in presenting yourself as an aspiring professional. With little else to go off of, a history of training indicates commitment to the craft. List either the place where you’ve spent the most time training or the most prestigious/renowned acting teacher first.

List skills you are proficient in, you don’t have to be a professional at it but you should be able to pull off looking like one for a day or two!

Dialects fall under the skills category and should only be listed if they can be ready to go in a few hours or less. You must be able to sound native to the area of the dialect and you must be able to speak conversationally in this dialect. When in doubt leave it out until you’ve mastered it.

Finally, do not lie on your resume. You will get asked questions about the things you’ve listed and eventually the lies will catch up to you. It’s no different than in any other business…lying is unacceptable and a sign of a serious character flaw. It’s better to have a sparsely populated resume that is professional and polished than one that is puffed up with a bunch of useless, irrelevant, and even fabricated credits in order to impress a Casting Director. They are smart and will catch on to the smoke and mirrors very quickly, so resist the temptation and be comfortable with whatever stage you are at in the journey.

As an actor, control is something that is often elusive and can be a source of frustration as opportunities are often unpredictable and sporadic. This is an unavoidable aspect of being an actor, making it all the more imperative to work hard at taking control by whatever means possible. The resume is one thing you absolutely control, and a less than perfect presentation is inexcusable. So take action now and use these guidelines to ensure your resume is up to snuff. The knowledge that your calling card is the best it can be will give you confidence the next time you walk into that big audition!