How do you become a member of SAG? 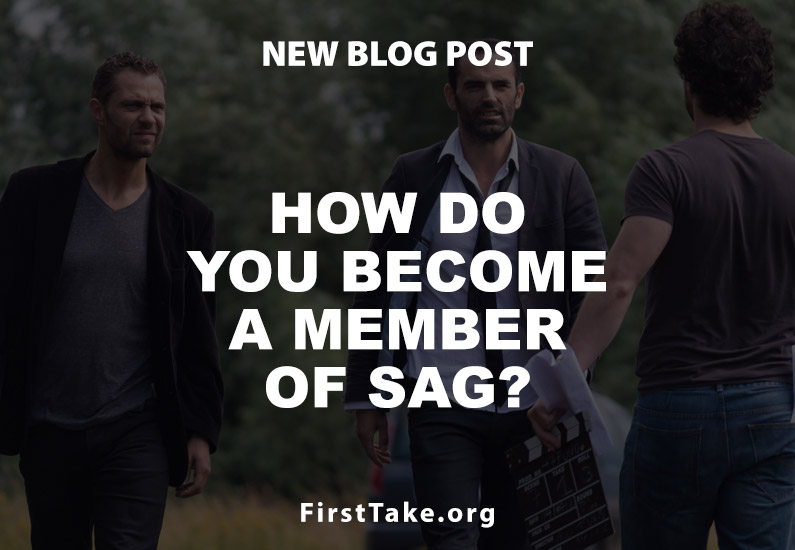 The short answer: Get hired on a SAG project to say something on camera.

Sounds simple enough, right?  Well, if you win the lottery and are lucky enough to have this happen to you then yes…it is simple.  For the remaining vast majority of the non-union actors out there it is generally a much more difficult thing to do.  More on that later, but let’s back up a second to discuss another important issue – and that is, when should an actor become a member of SAG?

Don’t Put the Cart Before the Horse…

It is true that almost all television shows, and most feature films with significant budgets are produced under union contracts.   Moreover, many Industrials, Commercials, and Webisodes are also made under union contracts.  So should every actor join the union as soon as possible?  Not necessarily.   Let’s look at what SAG has to say about it:

The SAG website states the following:
Screen Actors Guild membership is a significant rite of passage for every working actor. However, don’t be in a hurry to join unless you are sure that you’re ready to compete as a professional. Prepare yourself by studying, performing in plays and non-union on-camera projects in order to build your resume and gain valuable experience. Source: www.SAG.org

So when is the right time to join?  That is a question every actor must decide for themselves based on their individual goals and objectives.  Since it generally takes awhile (i.e. years) to become eligible to join SAG, it is a good idea to take SAG’s advice and work on your skills as an actor while gaining valuable experience on the best non-union productions you can find.   When the opportunity avails itself to join, you will be prepared to work as a professional at the highest level.

You’ve studied and practiced in the classroom and built your resume working on non-union films – it’s time to get serious and be recognized as a legitimate professional.  How do you get into SAG?   How do you qualify to join the union?

Referring back to the SAG website:
A performer becomes eligible for Screen Actors Guild membership under one of the following two conditions: (1) proof of SAG employment or (2) employment under an affiliated performers’ union.

Principal Performer Employment
Performers may join SAG upon proof of employment. Employment must be in a principal or speaking role in a SAG film, videotape, television program or commercial.

2) Employment Under an Affiliated Performers’ Union

Performers may join SAG if the applicant is a paid-up member of an affiliated
Performers’ union (ACTRA, AEA, AFTRA, AGMA or AGVA) for a period of one year and has worked and been paid for at least once as a principal performer in that union’s jurisdiction.

Simply stated, if you work as a principal performer on a SAG project, or work as an extra (aka Background Performer) for three days at full SAG rates (for which you receive vouchers) you are eligible to join SAG.

You are also eligible if you have been a paid up member of, for example, AFTRA for at least one year AND have worked and been paid as a principal performer (i.e. you said something).

Things to keep in mind:

Remember, until you have gained sufficient acting skills and built a respectable list of credits (i.e. experience) it’s not a good idea to join SAG.  You will only be cutting yourself off from potential money making opportunities, and more importantly losing the chance to get some good material for your acting reel.  When you are going on more auditions for Union projects than non-union projects…that is the time to start saving for your SAG initiation dues.

Until then keep working on your craft and remember…you are enough!