Bare Your Soul, Thicken Your Skin, Then… Keep Going! 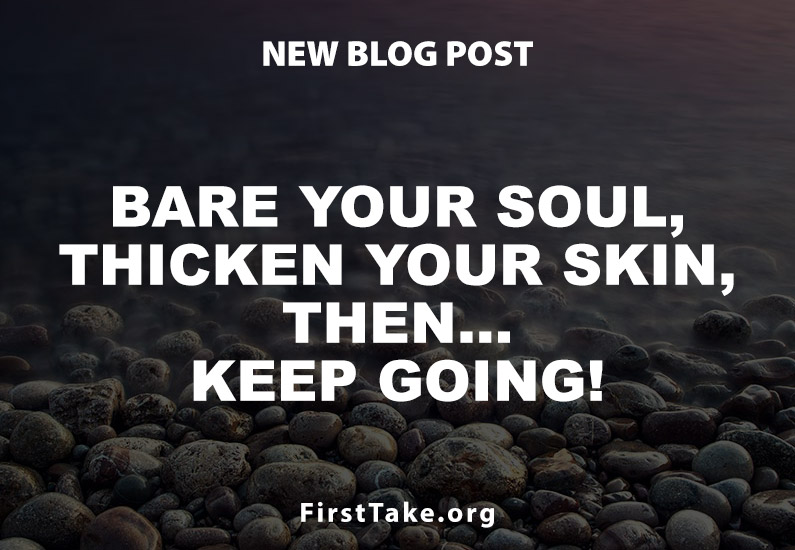 Let’s face it, becoming a professional actor is not an easy proposition. For those who aspire to it there can be no denying the rewards are enticing and potentially lucrative. Each individual has his or her own purpose in mind when attempting to fulfill this dream of being catapulted out of relative obscurity to becoming a household name, but it cannot be had for the mere wanting of it. It takes resolution, strength, vulnerability, skill, growth, humility, emotional & financial investment, stamina, and incredible perseverance. Moreover the actor must be willing to reveal himself to the world and risk hampering his enthusiasm, passion, and growth via defense mechanisms that are meant to protect him from harsh criticisms and judgments. In short, he must bare his soul while keeping his skin thick…and then continue on the journey whatever roadblocks may appear. This is the path of growth.

Too many actors get discouraged just at the time they are building a foundation for long term success in a profession that requires staying power. Their skills are improving in acting class, and even though they are in fact moving in a positive direction towards their goals, they may have difficulty reconciling unrealistic expectations with the actual progress (or lack thereof) in meeting career objectives. It’s normal to have low points on the journey, but the decisions that are made after the setbacks are what matter the most.

It is said that a great NFL quarterback has an equally great short term memory. For in the throes of a championship game that has gone all wrong, it is only the confidence, poise, and skill in single moment that counts if the game is won on the final play. The same quarterback could have thrown 5 interceptions and fumbled in his own end zone earlier in the game, but he must put that out of his mind completely to focus on the task at hand…a successful next play. The only play that matters…the one that could in fact win the Super Bowl.

In this regard, actors must think very much like an All-Star quarterback. Bad auditions, no auditions, criticisms, stunted growth, rejections, fear of rejection, insecurities, bad performances, disillusionment, and depression can all be part of the actor’s life. The difference between those who become successful and those who languish in relative obscurity is not what happens to them along the way…it’s what happens after the disappointments, setbacks, and frustrations. In short, it’s the psychology of the individual in question that will determine the destinations, not the specific circumstances. Actors come from all different backgrounds, circumstances, and places. Some were raised in poverty and some come from upper class families. Some learned their craft at prestigious institutions while others practiced on the street corner for anybody who would watch. The commonality of successful actors is generally not a function of where they came from, but who they were willing to become by facing the uncertainty of the unknown with uncompromising resolve and determination. An unwavering belief in oneself is the prerequisite above all others that is necessary to succeed.

Embrace the journey with its twists and turns, ups and downs, and sometimes what appear to be insurmountable obstacles, and remember that you are not alone. Be mindful that others are confronted by the same obstacles and must decide every step of the journey if they too will continue. Have a great short term memory when it comes to negative experiences and remember, becoming a working actor in Hollywood is a decision, not a one in a million shot in the dark. Ask empowering questions along the way instead of feeding your mind with negative thoughts and useless mantras. Take care of everything in your control; stay disciplined and focused on your craft, work hard in acting class and keep promoting your brand in every way possible. Prepare for opportunities so that when they come, you are as good as you can be…and you’re better than you were the time before. Don’t forget that the only way to be certain of failure is by not taking the most important step of all…the next one!